For the past few days, I haven’t been able to sleep very well. Charlottesville and activism have been in my mind for days. What happened is, frankly, not surprising. Rather, I found it terrifying and disappointing. I have been reading, listening and watching over these past days. Last night I watched the unfinished manuscript by James Baldwin (turned into a documentary), I am not your Negro, and another documentary, 13th, by an amazing director, Ava Duvernay. I think James Baldwin’s thoughts matched well with a podcast I listened to some week back called, On Whiteness. Baldwin spoke about how creating an apartheid system, a system that aims to strip away humanity, created monsters – the white oppressors. That in creating an identity of fear and criminality in black people, they in turn had to create an identity of what it is to be white. This creation of white identity in opposition of black identity is historically recounted in the podcast – the rules and regulations created around a persona and what to do when someone is visibly white, but a parent is black. The straining creation of identity and separation, the exhausting nature of racism and identity politics that continues to haunt Americans today.

Baldwin sought to escape this constant racism by going to France. While I am not Black, I understand him. I, too, decided to flee the United States. It is exhausting to be constantly defining your identity, to validate nationalism (what most call patriotism), to proclaim the greatness of America, when for me, what I see is terror, violence and apathy towards humanity.

We claim America to be free – in fact the most free in the world. We pat ourselves on the back for defending freedom of speech, even in the consequence of others. This is what troubles me. Free speech, though a constitutional amendment, also has limits. Hence, hate speech and calls to violence are not legal. So then, why should white supremacy be protected, as well? Why is this group not torn down as a terrorist organization? The black power movement was vilified as an armed group to be taken down by the FBI and they provided social services and intellectual spaces for black Americans to discuss and protect themselves. Why is it that the black power movement was systematically dismantled, while this rise of alt-right fascists are protected by state troopers?

There are two images that have been lingering in my mind these few days. 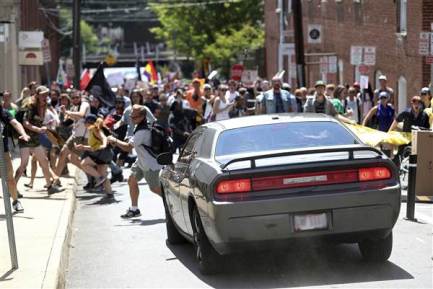 White Americans are patting themselves on the back for the picture on the left – congratulating themselves for protecting free speech at any cost. That picture is an emblem of the history of institutional racism in our country. White Americans have always had their rights protected – always. They were never subjected to being dehumanized, their rights revoked from Jim Crow laws to mass incarceration. That photo is not a symbol of pride, it is a symbol of institutional racism – that your rights as a white person will always be protected at any cost.

The photo on the left is the reality of the situation. That should you fight for the black lives movement, you will not be protected by the state. You will be the subject of terror. May that be in this violent act that we have seen in Charlottesville or on the streets of Ferguson or on the street being stopped by a cop or being harassed or simply feared because of the color of you skin.

What troubles me so much during these days is how we got here, again. What troubles me is Trump and his ambivalence toward calling racists what they are – terrorists. He is a reflection of the rise of fascism and white supremacy in this country and what is scarier, our tolerance to it.